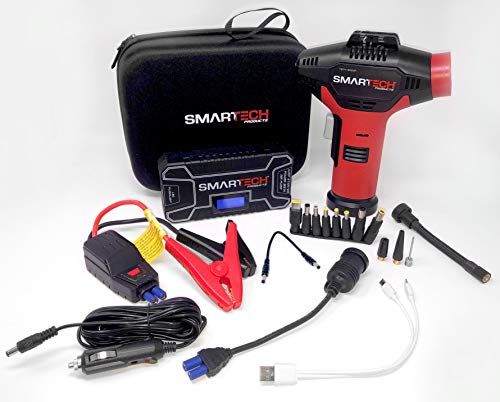 If you are looking for a Jack-Of-All-Trades power bank, SMARTECH Power Kit maybe your best bet. The unit is designed to serve as a charger for digital devices and other small appliances, but it can be extremely useful for vehicle owners as it can also be used as a vehicle jump-starter and air pump. This device also features a flashlight that emits a steady beam, flashing beam, and an SOS pattern of illumination which can come in handy when you’re in trouble.

Those who have been stranded due to battery issues will understand the importance of having a vehicle jump starter at all times.  The SMARTECH Power Kit features a vehicle jump-starter and a battery clamp that will come in handy for the inconvenient times your vehicle refuses to start. The accessories can start-up vehicles including: SUVs, vans, boats, trucks and RVs; and pretty much any engine that is less than 5.5-liter capacity.

Note:  If you put the battery cable upside down, the device will beep, notifying you that the cables are incorrectly placed.

The units come with a 12000mAh Lithium-ion rechargeable battery. The battery will last a whole year without being recharged, nonetheless, you can recharge it up to 1000 times and can be charged for seven hours.  If you want optimum performance, you should charge the battery at least every three months.

This is a jack-of-all-trades kind of a unit. It can charge several digital devices and home appliances with the two USB ports. The 12-volt power source means that it’s pretty compatible with most digital devices.  For smaller devices, you will use the 12-volt power and for others like your laptops, smartphones, the two-port will suffice just fine.

SMARTECH Power Kit also comes with an handheld 150 PSI air pump, so whatever it is you need to inflate, this unit will definitely work for you.  Whether it is a soccer ball, your bicycle, pool toys, bouncing castle, flat tires; whatever it is you need inflated, the air pump will do it all. The pump features a three adapter pin fitted with an LED light, so if you get a flat tire at night, you will be able to view your repairs without any visual impairment.

You can easily read an LCD digital display on your SMARTECH Power Kit. It features a clear, large number with a light blue background.  There are three modes of super LED flashlight (Steady on, Strobe, and SOS). The handheld air pump has similar features allowing you to see the level of pressure when inflating.

The kit has circuitry protection that stops all part of the kit from sparking or shocking you.

SMARTECH Power Kit may not start engines that are higher than 5.5 liters in capacity. So if you have super powerful engines, the kits may not come in handy. The same goes for vehicles that use more than one battery.

The units come in handy when you have an emergency, but it does not work and shouldn’t be used in freezing cold.  Avoid storing the SMARTTECH Power Kit in temperature below freezing points. So avoid storing it in your car or garage during cold seasons.

You do not have to charge the devices frequently. However, don’t let the level of charge in your kit sink too low since most of the kit functions are more efficient when the battery is fully charged. So, make sure that the battery is charged every three months even if you do not use the kit a lot.

It would be fair to conclude that SMARTECH Power Kit does provide great value for your money. It may be a good idea to purchase the kit from a reputable store or online source. There are certainly several alternative products that may come at lower prices however they may not have as many features as this unit.